"I’d like to say thank you to the medical staff at Sejong Hospital for helping me give birth to my son safely and protecting my son’s life," said Najiyashi (female, 38) and her husband with their less-than-a-month-old child. The Kazak family thanked Sejong Hospital on June 29, leaving the hospital.

Designated by the Ministry of Health and Welfare as the only cardiac hospital in Korea, Sejong Hospital announced on the 21st that a mother of Kazakhstan nationality gave birth to a son with heart disease and was discharged after heart surgery for the newborn baby.

At the 32nd week of pregnancy, she was diagnosed with fetal heart disease at another hospital, and her husband was working as a councilor at the Kazakhstan embassy in Korea. The couple visited Sejong Hospital on May 25 as one of their friends recommended them to do so.

"I came to Korea with my husband because of his work. It felt like the world was falling apart when I heard that the fetus was diagnosed with heart disease at another hospital," she said.

Yun Won-shik, the Director of Obstetrics and Gynecology,  saw her first and then Kim Jeong-yun, the Director of Pediatrics,  worked together to examine the condition of the fetus more precisely.

On prenatal ultrasound, severe tricuspid valve regurgitation was observed with moderate right ventricular dysfunction, and blood flow through the pulmonary artery valve was not seen, so it was diagnosed as 'complete ventricular septum with pulmonary valve closure,’ which is a rare case found in 4 to 8 out of 100,000 fetuses.

Since it was a high-risk case, and medical staff from Obstetrics and Gynecology, Pediatrics, and ICU discussed the case and the childbirth was scheduled for June 10, concluding that it would be not a dangerous situation when the fetus was still in the stomach, but during the delivery, an emergency may take place. Afterwards, until the day before childbirth, the medical staff who participated in the consultation talked about how to conduct the procedure or surgery in case of an emergency.

On the day of childbirth, she gave birth to a 3.65 kg baby boy by cesarean section. Immediately after childbirth, the child, fortunately, had good levels of oxygen saturation and urine volume because the pulmonary artery blood flow through the arterial canal was well maintained.

Under the condition that the patient can remain stable with conservative treatment (medication to maintain the arterial duct), we decided to perform the procedure in 7 days after birth. 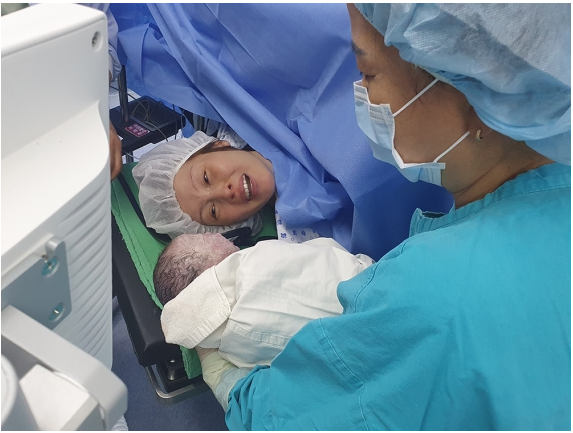 "We decided that it would be sensible to determine whether to choose from a procedure or surgery after accurately evaluating the shape of the pulmonary valve and coronary artery as well as the size of the right ventricle through echocardiography immediately after birth," said Kim Jeong-yun, the Director of Pediatrics. “We heard that surgery was recommended at another hospital, but as the fetus was in good condition, and given the formation of the right ventricle and the shape of the pulmonary valve, treatment through the procedure seemed to be effective, so we proceeded with percutaneous pulmonary balloon valvotomy.”

The child recovered gradually with no abnormalities in a blood test and echocardiography and was discharged in about 11 days. In post-discharge follow-ups, the baby showed good conditions such as increased weight and activity.

She said, "I was nervous because I went through childbirth and my son had to take a procedure in a foreign country, but I was able to reassure myself in the process because I trusted Sejong Hospital." She expressed gratitude, adding “Trusting in the hospital seems to lead to healthy childbirth and the success of the child's medical procedure.”